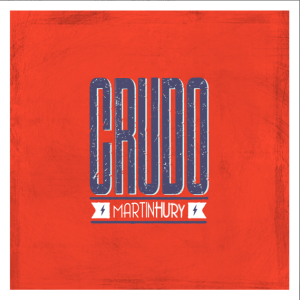 Martin Hury is a blues guitarist/vocalist originally from Argentina, now based in Canada.

Born and raised in Buenos Aires, Argentina, Martin first picked up the guitar at 15 and gravitated immediately to blues. As the years passed, he began incorporating jazz and rockabilly into his playing, creating his own unique style.

Martin was an important sideman in several blues bands up until 2011, when he decided to step out and lead his own project. With a solid command of the guitar and the stage, Martin quickly established himself as a strong leader.

Martin’s music encompasses his voice in Spanish/English with extraordinary American Blues sounds and chords in an innovative and singular way. His talent stretches through his songs as well as his control of the electric guitar which is characterized as an original fusion between the blues from southern USA.

So I've only had a few sessions with Martin so take this into consideration when reviewing my comment.

I reached out to Martin since I was in a rut moving from video to video trying to learn guitar and get some type of motivation.

Martin has helped me to get the spark back by providing me with a structured way to approach the blues and the Saturday sessions are not coming quick enough! Love his approach and his obvious love of the guitar and the blues.

My suggestion would be: Stop with the random YouTube videos and get on a structured course path from Martin! The instant feedback you get from your questions is amazing and less time consuming!

Taking my first guitar lessons from Martin has been amazing. Martin has a way to explain things that allow me to visualize and understand the instrument. I Am about to complete my first series of lessons, and I still can't believe the progress that I've made. Looking forward to continuing taking lessons from Martin and achieving my goals. Highly recommended.

Do not miss the opportunity to learn from YODA !
Martin is a GREAT teacher. Lots of knowledge ( theory as well as practice)
ON LINE Lessons are surprisingly effective !

Martin is a very good guitar player and teacher. Thanks to him I discovered new things and a new approach to the instrument. Recommended

Martin is a great teacher and great player. I'm having a great time learning from him.
His lessons have helped me unlock the fretboard in new ways. Friendly, inspiring and professional.

I have been playing guitar on and off for about 15 years and would describe myself as an intermediate player playing mainly blues. Although I had a reasonable understanding of the five minor pentatonic shapes I just couldn't seem to break out of the boxes and my playing sounded bland and lacking flavour. I have never been great at learning scales and mainly just improvise in the minor pentatonic's.

I stumbled across Martins videos on YouTube and was immediately drawn to his playing style, and clarity explaining how he sees the fretboard. I decided to take online Skype lessons with Martin as I live in New Zealand, and it's the best thing I have ever done for my playing. For the first time ever I can play over a 12 bar blues without feeling restricted to the shapes. I play a lot more blended patterns now using the hybrid scale and adding notes as the “salt and pepper” to give a more major flavour.

The lesson on the three zones of the pentatonic patterns was a huge lightbulb moment and helped me see the fretboard in a whole new light. It makes a lot more sense now.

Martin has also really helped improve my rhythm playing with some excellent tips and advice.

He has a natural teaching style that sets an ideal learning environment so students at any level can feel relaxed to learn. I am looking forward to more lessons with Martin soon to continue my improvements and would totally recommend him to others.

The space of this testimonial box is probably too small to allow me to express my enthusiasm and gratitude generated by Martin. Great human being to start with, Martin will always give you the best of himself: great teaching techniques, theory of music delivered in a proper and easy manner, great advice to improve your skills, history of music and so much more. A pleasure to be around him, great teacher and talented musician with an impressive music background, Martin will always be my reference for a great and tasteful mixture of jazz and blues on the Montreal scenery.

Martin in really an inspiring teacher!! He knows how to transmit his passion for the blues, which is the most important thing. He thought me lots of guitar tricks that accelerated my learning...how to visualize positions in the guitar neck, how to mix minor and major scales, how to change scale over a blues progression, how to add a jazz sound to the blues. I really learned a lot from him so far!
Muchas gracias Martin!

Very good teacher. Not only teaches, but play in a band as well. Pationate about blues.. Knows ALL the guitar blues players!! wow! 🙂

I strongly recommend him if you're interested in learning blues...

Martin's combined skill, experience and love for music make him a highly qualified guitar teacher. His love for music is contagious and inspires you to put more time into your music.